Rocco Baldelli's career has been one full of ups and downs. He found immediate success in the majors, nearly winning the 2003 Rookie of the Year award, and began drawing comparisons to Joe DiMaggio (really). Then the injuries started.

Torn ACL in 2005 ... Tommy John surgery for an elbow injured during ACL rehab ... series of hamstring injuries in 2007 ... severe fatigue that limited his play in 2008 (finally diagnosed as "some type of metabolic and/or mitochondrial abnormalities").

But through it all, he battled back, and earned a one-year deal with the Red Sox in 2009.

Now, he's trying once more to make yet another comeback, currently playing with the Charlotte Stone Crabs (A) in the Rays organization. To help his return, Baldelli has done the obvious: grown a sweet mustache. 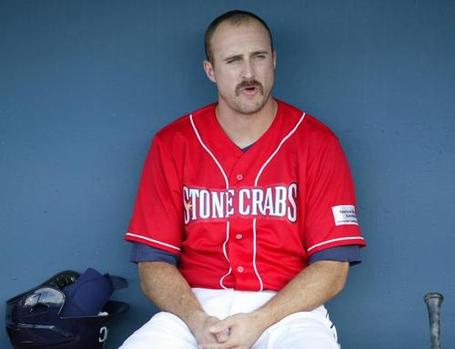 Noting that Baldelli "arrived in Port Charlotte with a respectable moustache that has since transformed into arguably the best moustache in the Minor Leagues if not all of professional baseball," the Stone Crabs are making the following offer "in tribute to the sheer awesomeness" of Baldelli's facial hair:

All fans with a naturally-grown moustache who purchase a ticket to Wednesday’s game receive a free team hat and a free ticket to Saturday’s game against Lakeland that features a post-game fireworks show. 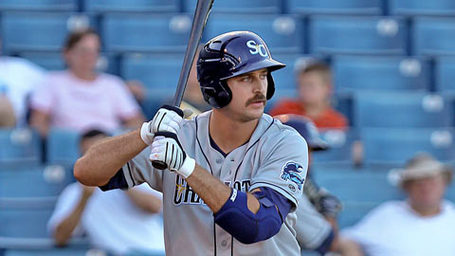 Good luck striking that out.