Patriots Training Camp: Welker Takes Part In Practice, Not Yet 100%

Share All sharing options for: Patriots Training Camp: Welker Takes Part In Practice, Not Yet 100%

Wes Welker, who was removed from the active/PUP list on Sunday, just eight months after an ACL injury, took part in the team's afternoon practice, though his participation was limited.

Before the second session, Welker spent some time answering questions from the media, where he said, "It doesn't feel like I ever left [the field]," but was also quick to remind that he's not all the way back just yet.

WW: No. We're not there yet, but every day we get a little bit closer. Slowly but surely we are making progress.

Q: Did you ever think in your wildest dreams that you'd be back out there this early after the injury occurred?

WW: I don't know. I just wanted to take it each day, a day at a time and sit there and work at it and try and get better each day. 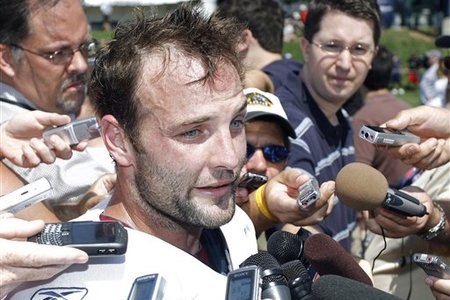