Is this the face of the new Patriots quarterback??? 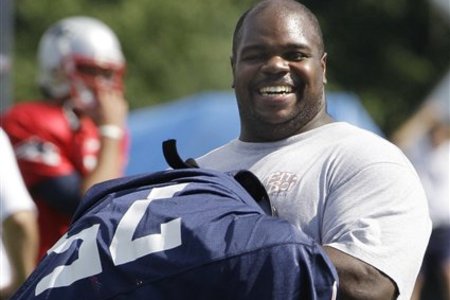 Over the weekend, Tom Brady was seen with tape on his index and middle fingers (of his throwing hand!), apparently dealing with a finger injury suffered in the preseason game against the Saints. Brady said that "It's nothing," while Bill Belichick added, "I don't think it's life-threatening" (always the jokester!). Okay, so it's apparently not a big deal ... which is why it makes perfect sense that no less than 19 posts and articles popped up about it as the Patriots beat writers went into FULL PANIC MODE.

The chatter was enough to finally talk some sense into the Patriots' coaching staff, and force them to start planning for another quarterback in 2010. Enter 6-foot-2, 325-pound Vince Wilfork, who took snaps running the offense in Monday mornings practice.

- Practice ended with a spirited scrimmage. Except the defense was the offense and the offense was the defense. So Vince Wilfork (pictured) was the QB, Randy Moss was the safety, etc. And Wilfork showed off a ridiculous arm for a big man. Looks like the defense looked like it owned the offense... on offense. Moss' favorite receiver appeared to be Patrick Chung. When Darius Butler scored, he dunked it reverse over the goal post.