The (very) early MVP for the Celtics in Orlando's Summer League has been second-round pick Luke Harangody. In Monday's game, he led Boston with 23 points on 9-of-13 shooting, and on Tuesday he totaled 14 points to go alone with 12 rebounds. And today, in the third game in as many days, Harangody was leading the Celtics with 10 points at halftime. Already, he's third in scoring (18.5) and fourth in rebounding (8.0).

Clearly, Haraongody is going to make the most of this opportunity. And clearly, he does not care that this is "just" the Summer League. 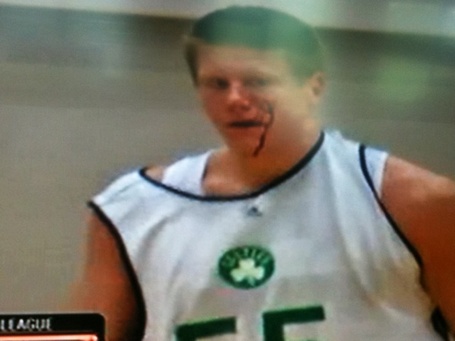 Harangody just took a shot just below the eye and came off the court bleeding pretty good. Looks like he may need some stitches...

Like the gamer he is, Harangody is expected to return after getting taped up. Because he's a hockey basketball player.