In Which We Discuss Tom Brady's Justin Bieber-Like Hair

Share All sharing options for: In Which We Discuss Tom Brady's Justin Bieber-Like Hair

Though it's still only the preseason, Tom Brady showed up to training camp on Thursday with his luxurious locks in mid-season form: 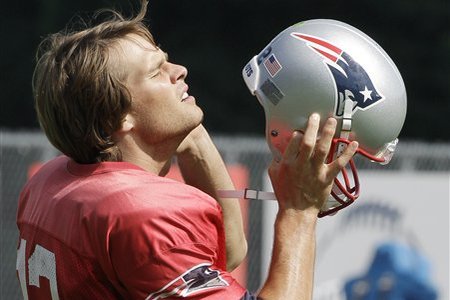 It's a look that Brady originally debuted back in June, and if you're thinking that it resembles Justin Bieber's do, well, you're not alone ...

Today, during his first interview of the training camp, I asked Brady about it. So... did they not have barbers in California?

"No, no," Brady said, smiling. "Different look this year."

Fair enough. Then, I couldn't resist...

Was it Justin Bieber's look that gave you the idea?

Brady started shaking his head and laughing to himself. Yeah, I'm an idiot.

Ah, the excitement of training camp.