Football At Fenway Shows Versatility Of America's Most Beloved Ballpark

Wednesday night, Fenway Park capitalized on the World Cup craze by hosting a match between two notable European clubs. And Nick Fasulo from SB Nation's Searching for Billy Edelin says they nailed it.

Share All sharing options for: Football At Fenway Shows Versatility Of America's Most Beloved Ballpark

When John Henry, Larry Lucchino and Tom Werner took the reins in 2002 as the owners of the Boston Red Sox, they viewed Fenway Park, then the oldest standing baseball stadium along with old Tiger Stadium, as the jewel of the acquisition. In 1999, then Sox CEO John Harrington was intent on blowing up America’s Most Beloved Ballpark, and building a newly replicated cathedral to keep up with the times. But with this city’s rich history, newer wasn’t quite perceived as better among residents. 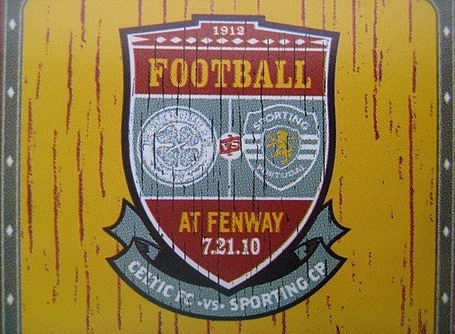 Eight years into the New England Sports Ventures reign, Henry, Lucchino and Werner have creatively modernized Fenway, and turned it into an absolute cash cow. They’ve put fans on top of the Green Monster, partnered with a corporate sponsor to turn the "406 Club" into the "EMC Club," held summer concerts from Bruce Springsteen to Phish, hosted an NHL regular-season game, and even turned the venue into a temporary federal court to host a naturalization for 3,032 immigrants from 140 countries.

Wednesday night, the trio capitalized on the World Cup craze by putting on a soccer game between two notable European clubs. And on behalf of the other 32,162 in attendance... they nailed it.

The match, between Glasgow, Scotland’s Celtic FC and Portugal’s Sporting CP, was quite a spectacle to anyone that had only before visited Fenway to see the local nine take the field. Dubbed the "Fenway Football Challenge," NESN spent weeks promoting  the friendly match by incorporating baseball- and Red Sox-centric terms and phrases that transferred over to soccer speak… "If you can yell Yoooouuuuuk, you can yell Goooooaaaaalllll."

Upon arriving at the park, I was blown away by the activity hours before kick-off. If a blind guy stood at the corner of Brookine Ave. and Landsdowne St., ignored the infrequent "Hail! Hail! The Celts are here. What the hell do we care? What the hell do we care?" and "Viva Sporting! Viva Sporting!," took in the sounds and aroma of his surroundings, he would have asked you who was on the bump for the night’s (baseball) game. 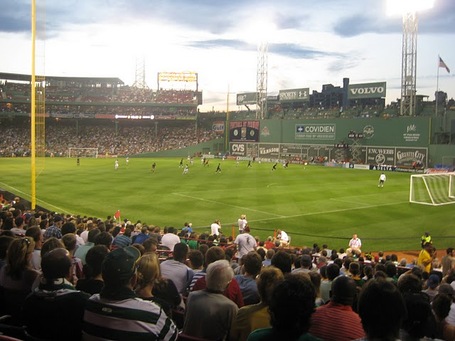 Fans filled Fenway watering holes to capacity, creating lines along the streets usually reserved for a Yankees weekend. Twentysomethings who may have spent a semester studying abroad, knowing little about soccer, donned their favorite knock-off Barcelona and Chelsea jerseys as self-affirmation they were ardent fans of the sport.

Celtic fans (many of them giving off the vibe that they’re called Sully or Fitzy or Jackie by their buddies) far outnumbered Sporting fans (who all wore Cristiano Ronaldo jerseys, despite the fact he spurned his hometown team for Manchester United in 2003). But during the game, the crowd would erupt at the slightest hint of activity on the field – "talking points" as they say across the pond – because everyone just wanted to witness a goal, no matter the team. And despite the foreign feel, the man of the match for the 1-1 tie that was settled by penalty kicks was fittingly Celtic midfielder and captain Scott Brown, who shares the same name as our latest state senator.

So what does Fenway do next? The park doesn’t have enough good sight lines for basketball, and the sheer volume of bodies involved in an NFL game means the Patriots probably won’t be returning to the venue they called home from 1963-1968.

With that, I'll take an event that never gets old, and ask for the World Series to come back to town. Boston loves Fall Classics.