Share All sharing options for: Grading The Celtics' Offseason

The Celtics have been busy this offseason. Re-signing Paul Pierce and Ray Allen. Flirting with the idea of needing a new head coach before Doc Rivers opted to stay. Adding Jermaine O'Neal while dealing with Kendrick Perkins' surgery and the probable retirement of Rasheed Wallace and losing Tony Allen to the Grizzlies

And while it's not over yet, CelticsBlog it taking a step back, asking: "How would you grade free agency / our off-season so far?" 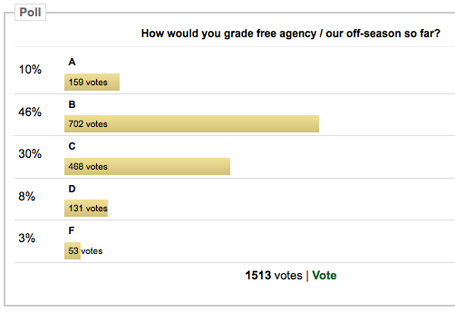 The grading from Celtics fans matches that given by Matt O'Brien at SBNation, who graded the offseasons thus far for all the teams in the NBA and awarded Boston with a "B+"

The Paul Pierce extension was a bit pricey, but two years each for Ray Allen and Jermaine O'Neal gives the Big Three one last hurrah to bring another title to Boston. After coming within a virtuoso performance from Ron Artest of winning Game 7 of the NBA Finals, the Big Three deserve that much.

For their efforts, the Heat earned an "A+++"