The Red Sox own four of the first 57 picks in the MLB First Year Player Draft: Nos. 20, 36, 39 and 57. For a complete look at Boston's farm system and a positional breakdown, see Ben Buchanan's work here, where he addresses the club's strengths and weaknesses. Now Randy Booth, editor of our Red Sox blog, Over The Monster, breaks down who Boston might take with their first pick.

When pick No. 20 comes around Monday night, all eyes will be on the Boston Red Sox. So where will they go?

They have plenty of choices, of course, and no one knows how the first 19 picks will go down. The hot name right now is LSU pitcher Anthony Ranaudo, a right-hander with some injury problems in 2010, but a high ceiling nevertheless.

Ranaudo and four other potential players the Red Sox may draft at No. 20 are profiled below. 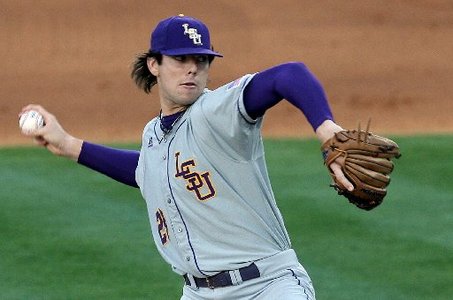 Ranaudo is a top-five talent that very well could fall to the Red Sox at No. 20 -- but it's no mystery if he does fall.

Not only is Ranaudo's agent the infamous Scott Boras, but injury concerns have dropped the right-hander's stock after a subpar 2010 season. Ranaudo was sidelined a month at the beginning of 2010 because of a sore elbow and hasn't been the same pitcher since.

In 2010, Ranaudo racked up a 7.49 ERA in 45.2 innings for LSU. He allowed 53 hits and 23 walks over that span. One nice nugget of information is that Ranaudo didn't lose his ability to strikeout a batter. He still struck out 44 -- almost one batter per inning -- despite the arm issues.

His 2009 season is one in which the Sox would be drafting him for: in 124.1 innings of work, Ranaudo struck out 159, held opponents to a .209 batting average and notched a nifty 3.04 ERA. That's what the Sox would expect out of the tall righty.

If the Red Sox take Ranaudo with the 20th pick, it's likely because they know they'll be able to patch him together and get him back to the pitcher that he used to be. If the Sox didn't think they could do that, they wouldn't waste a first-round draft pick on him. The Sox must also be confident they can sign him, which really hasn't been much of an issue in the past with Boras clients. 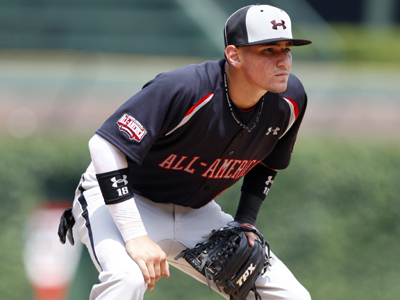 Just like Ranaudo, the Red Sox might be able to nab Nick Castellanos at the No. 20 pick because of signability issues.

Castellanos, a 6'4" expected-to-be third baseman out of Florida, is reportedly asking for a nice large signing bonus. As one of the best high school hitters in the draft, he may just be able to get what he demands. This is where the Red Sox step in.

Castellanos was named the Gatorade Florida Player of the Year in 2010 after hitting .542 with six home runs for Archbishop McCarthy. He's dominated at every level of high school ball, which is no surprise as some say he's the best pure hitter in the draft. He's adapt at spraying the ball all over the field, a nice plus for a high school hitter.

With third base being one of Boston's weakest points in their farm system, Castellanos makes sense. However, Castellanos is a lot like the other third basemen in their system: raw. Castellanos projects to have some pretty good power with an average glove at third base. He will really need to bulk up to stay durable, but he already has the quick hands to be able to catch up to fastballs. 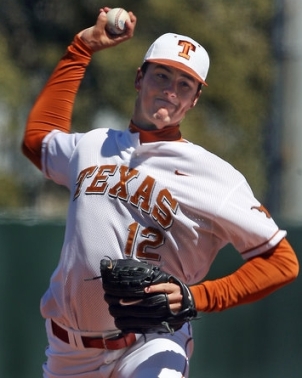 Just like his last name would describe, Brandon Workman is big, tough and throws hard. He's a worker.

The 6'5" righty has a four-seam fastball that can hit the mid-90s and a two-seamer that has some sink to it. His cutter is considered "plus," while he also adds an average curve and change to the mix. It's a pretty full repertoire for a starter, but also a nice little set list if he converts to being a reliever. Workman was a 3rd round pick back in 2007 for the Phillies.

Workman was quite effective this season and he wasn't even his team's best starter. In 99.2 innings, Workman allowed 94 hits, 23 walks and struck out 97. His ERA clocked in at 3.43 while opponents hit .248 against him.

The Sox love themselves strong, college pitchers. Last year they drafted Alex Wilson (Texas A&M, 2nd round) and Kendal Volz (Baylor, 9th), both of whom have already shown they're ready for a promotion. Workman could be the next college pitcher in the Sox system to slide in and start mowing down batters. 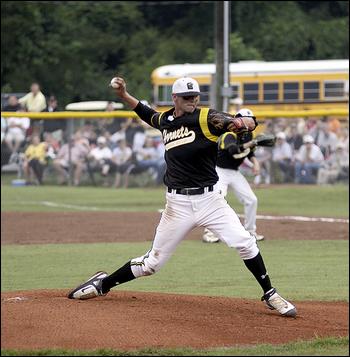 Cowart is a lot like Kelly in that sense that he's coming out of high school as both an effective infielder and an effective pitcher. And, just like Kelly, the question where he lands -- on the mound or near the bags -- is still up in the air.

Cowart played shortstop in high school, but most scouts see him becoming a third baseman at the professional level. He has a strong arm and is a decent fielder. He has a lot of power potential down the line.

As a pitcher, Cowart's best pitch is a mid-90s fastball with a lot of movement. Unfortunately, he doesn't really have the secondary pitches to back it up. He has a slider and a changeup, but they're not much to speak of at the moment.

Cowart has said he'd like to play every day and be an infielder, but his fastball is exciting enough to make him a pitching prospect. If he can develop some strong secondary pitches, it will probably be a no-brainer. Still, his future is bright either way. (If the Sox do draft Cowart, they may do the same thing with him as they did with Kelly - pitch him for a certain amount of time, let him hit for another, and then make a decision.) 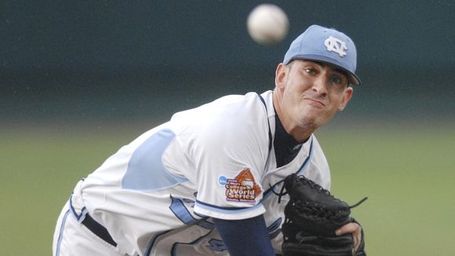 Introducing Matt Harvey, another hard-throwing college pitcher the Red Sox would like to wrap up.

After having a great freshman season, followed by a less-than-stellar sophomore season, Harvey rebounded for the Tar Heels to be the ace in 2010. The 6'4" righty went 8-3 with a 3.09 ERA in 96 innings of work this season. In that span he struck out 102 and walked 35. Opponents hit just .224 against him.

Harvey's biggest weapon is his mid-to-high 90s fastball that has a little movement on it. His fastball is assisted by a slider, a new pitch that he's developed over the last couple of seasons. It's an OK pitch, but has shown potential with it. He apparently used to throw a hard 12-to-6 curveball in high school, but now primarily throws a slider. He also has an average changeup.

Harvey is the kind of pitcher that could jump in the Red Sox system and find success early. If he shows even all right command and taps his fastball out at 97, he'll start marching up the ranks. Harvey may not slip to 20 though, as he doesn't have the signability issues like others mentioned.