In the first installment of SB Nation Boston's weekly Top Five Power Rankings, we ask -- and answer -- the question: Who is the most popular athlete in Boston? Sadly, no, it's not Darnell McDonald.

From Bill Russell to Bobby Orr to Ted Williams to Larry Bird to Rosie Ruiz, the Boston sports scene has had its share of popular athletes. But those are personalities best reserved for the record books, Halls of Fame and conversations with your dad.

What if we were to ask, right now, who is the most popular athlete in Boston?

We mean besides Glen Davis, of course, because that guy is clearly the most popular guy in Boston. Maybe in all of the NBA. Is it possible for anyone to watch this and not laugh? Doubtful. (Though I suppose a certain teenager in Orlando would think differently.)

But if we limit this discussion to players who do not have hilarious gifs, well, then, who's the answer?

Fortunately for us at SB Nation Boston, we have a great resource at our fingertips, a collection of over 250 outstanding team blogs, including one each for the four major teams in Boston, with a loyal (and vocal) community -- CelticsBlog, Pats Pulpit, Over The Monster and Stanley Cup of Chowder. So we went to the source and asked the fans: Who Are Boston's Most Popular Athletes?

Was it really a surprise? Three Super Bowl rings. Model-like good looks, to go along with his wife, who is an actual, real-life model. And not just any model -- Gisele Bündchen, who literally has been named "the most beautiful girl in the world" by Rolling Stone. On the field, he's an MVP, a five-time Pro Bowl selection, a two-time Super Bowl MVP and the owner of numerous NFL records. Add to that the charity work he does away from the game, and it's pretty clear to see why he's The Most Popular Athlete in Boston. Oh, and was also recently named one of GQ's Top 50 Coolest Men, which is apparently a thing.

Over at Pats Pulpit, Brady garnered an impressive 63% of the vote, by far the highest share of any team site's voting. Maybe community member Richie Grogan said it best: "Seriously, where would the Patriots be without him?"

This is a spot normally reserved for someone from the locker room in Fenway and not TD Garden, but Rondo's taken his game -- and his popularity level -- to another plateau during the 2010 Playoffs. Rondo has improved in his points per game (up from 13.7 to 16.5), 3-point percentage (21.3 to 38.9) and minutes played (36.6 to 41.2). But really, any and all increases in Rondo's popularity can most likely be traced back to this exact moment in Boston, two weeks ago:

In a poll over at CelticsBlog, Rondo earned 43% of the fan's voting, even beating out 2008 NBA Finals MVP Paul Pierce. At the very least, as user "P2" points out, Rondo will always have a fan in Chris Webber.

Sure, there's the stuff Pedroia has done on the field -- 2007 Rookie of the Year, two-time World Series champion (in Boston!) and 2008 MVP -- including play that is either in spite of, or fueled by, his diminutive stature (somewhat generously listed at 5-foot-9, 180 pounds, officially). But "Petey" has really earned his popularity with "dirtdog" attitude, a tireless work ethic and some rather memorable quotes. Oh ... those quotes:

"Did you bring your glasses for the laser show tonight?" text message to Kevin Millar, ESPN the Magazine article titled "170 Pounds of Mouth"

"Sorry for breaking all your records at [Arizona State University]." Pedroia to Barry Bonds during a game at Fenway.

"I work more than anybody in baseball. That's a fact. I'll definitely put the time in and make sure I have a great year. So 'Laser Show.' Relax again."

Pedroia on not knowing the ground rules: "I try not to listen to Tito, DeMarlo, or any of our coaches. I don't want to get dumber."

And those last two are just from this season. Pedroia earned 40.5% in voting at Over The Monster.

If it were a different part of the year, or if Rajon Rondo wasn't busy taking over the NBA Playoffs, then Pierce is probably higher. But as it is, The Truth checks in as the fourth-most-popular athlete in Boston. We can't explain it, but Pierce just seems like one of those guys who everyone just likes during his career, and then five to six years after he retires, they all finally realize, "Oh, wow, hey, Pierce had seven straight seasons of averaging at least 21 points per game, and after his first 12 years, had a career average of 22/6/4, all while appearing in at 76 games a season (excluding his rookie season) and serving as the face of a franchise." 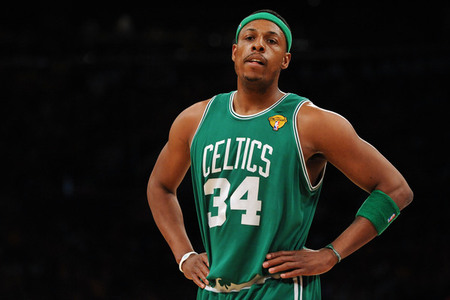 User DocOne made his case at CelticsBlog, where Pierce tallied 31% of the voting:

He was here for the WORST of times and never once started whining and crying about sucking. He went about his business and did whatever he could to make the team better and when he finally got some talent around him he sacrificed his own personal stats for the good of the team. He knows what it means to wear Green and White and will go down as an all time C’s great

Come on guys, this isn't difficult. In fact, here's a foolproof guide to becoming one of the most popular athletes in Boston: toil away in relatively obscurity in San Diego and Miami for three seasons. Get traded to the divisional-rival Patriots, immediately lead the league in receptions in two of your first three seasons with 112, 111 and 123, and make seemingly every big catch need on third-and-7. Got all that? Great, you're a top-five athlete in Boston, congratulations!

Welker is practically a walking cliche -- scrappy, tough, gritty, prefers to eat solely out of a lunch pail, etc. And now, he's apparently some kind of super-human, able to recover from torn ACLs in a few months.

Just kidding -- leave your own top five, No. 1, or even top 37 Most Popular Boston Athletes in the comments.