While the 2010 World Cup is happening nearly quite literally on the opposite side of the globe, the contributions and influences from football fanatics -- both fans and players alike -- in the Boston area have still managed to make an impact in South Africa.

It's no secret that soccer is considered the world's game. Every four years, the mysterious sport with little scoring, and penalties for using your hands, two aspects seemingly inconceivable to many Americas, captivates everyone from Australia to Slovenia to Chile. And yes, even here in the United States, where matches against England stir enough of a patriotic response to fire up soccer's biggest detractor.

And while the planet's biggest sporting event is happening nearly quite literally on the opposite side of the globe, the contributions and influences from football fanatics -- both fans and players alike -- in the Boston area have still managed to make an impact in South Africa.

We know, Dempsey is from Nacogdoches, Texas (a fact that makes him the most hood soccer player, maybe ever), but the 27-year old winger began his professional playing career with the New England Revolution of the MLS. "Deuce" joined the club in 2004, and promptly won MLS Rookie of the Year honors. The following year, Dempsey helped lead the Revs to their best season ever and an appearance in the MLS Cup. It was with New England that Dempsey truly shined, and helped him earn a spot on the 2006 U.S. Men's National Team, which may have been a long-shot previously. (FC Dallas passed him over twice in the MLS draft.)

"You could see he had a little bit of an edge,'' former Revolution assistant coach Pete Simonini said. "By that I mean he was confident, he could shoot with both feet, take people on, play under pressure. And that's what you need."

In December of 2006, Fulham of the English Premier League paid New England a $4 million transfer fee, the largest amount paid for an MLS player at the time. With the Cottagers and the USMNT, Dempsey has turned himself into an international soccer star, but for Deuce, it all began in Gillette Stadium, with the Revs.

Robert Kraft is not just the owner of the New England Revolution, one of the charter members of the MLS. He's also served as the Investor/Operator of the San Jose Earthquakes for two seasons, had interest in purchasing Liverpool of the English Premier League and had Gillette Stadium play host to the MLS Cup on three separate occasions. Perhaps most importantly though, Kraft is also a big fan of the game, and a major reason why soccer has seen increased popularity around New England.

Kraft, a long-time supporter of the United States hosting the 1994 World Cup, was influential in Foxborough becoming one of the nine host venues in that tournament (two years before the Revs would play their first season). But he didn't stop there. Foxborough has hosted 25 international matches since 1990, for both the men's and women's national teams (the two teams have posted an impressive 20-1-4 combined mark there), as well as contests for the CONCACAF Gold Cup.

And now, the man with an estimated worth of $1.5 billion, is on the Board of Directors seeking to land the 2018 or 2022 World Cup for the United States, a tournament in which Boston would once again play a key role.

No, he's not on the U.S. Men's National Team. And no, he's not even playing for the Revolution. But what he is doing is providing timely commentary and instant reaction as World Cup 2010 progresses, 140 characters at a time. Twellman has been very active on Twitter since play began in South Africa, and isn't afraid to tell his 5,000-plus followers exactly what he's thinking.

#world cup is definitely going to change with the 2nd group phase games. now teams will have to decide if they wanna advance or not!!!less than a minute ago via web

#ITA didn't look so bad to me and esp with Pirlo and Gattuso not playing. #ITA is not going to go deep however. #worldcupless than a minute ago via web

I am stunned at what just happened with #esp. Fabregas /Torres don't start hhmmm. They deserve to lose for taking #SUI lightlyless than a minute ago via Twitter for BlackBerry®

Additionally, the five-time MLS All-Star and one of the league's best scorers ever, is doing work for Comcast SportsNet New England, appearing on "SportsNet Central’’ to break down that day’s matches.

Like most cities, The Hub is making itself very soccer friendly, with lists of bars and venues showing all the matches. But based on Revolution announcer Brad Feldman's reporting, it would seem the place to be is the North End for Italy matches: "After De Rossi’s goal, prompted by the outburst generated by fans crowded in the cafes and trattorias ... "

Even Fenway Park is getting into the act, playing host to a friendly between Celtic FC of the Scottish Premier League and Sporting Clube de Portugal on July 21 (okay, so it's a couple weeks after the Cup final, but let's cut some slack for a baseball park that's almost 100 years old). 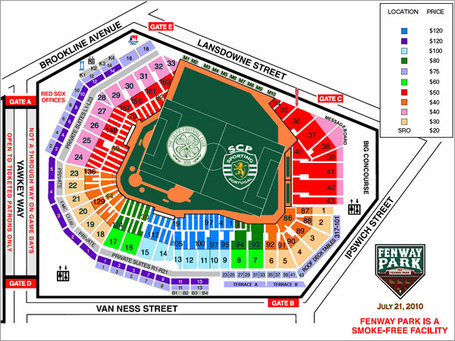 A native of New Hampshire, Davies spent his college days at Boston College, where he led the Eagles for three seasons. In 2006, his junior (and final) year, he was a finalist for the Hermann Trophy, presented annually to the country's top college soccer player. Davies finished his time as an Eagle with 24 goals in 37 matches, including 15 goals in his final season.

Davies opted for a career in Europe instead of MLS, catching on with Hammarby IF of the Allsvenskan, Sweden's highest league of club soccer. After two successful seasons there -- 18 goals in just 36 matches -- he joined Sochaux of France's Ligue 1 in 2009. Then, unfortunately and tragically, Davies became a household name in October of 2009 when he was seriously injured in a devastating car crash just outside of Washington, D.C.

The U.S. striker suffered a broken right femur and tibia, a broken left elbow, facial fractures and a lacerated bladder. And amazingly, despite all of his injuries, he returned to full training with his club in April, and nearly made the 2010 USMNT World Cup squad before being left off the preliminary 30-man roster.

In many ways, Davies is still with his teammates in South Africa, providing inspiration, and the kind of motivation that never appears on the stat sheets. He is seemingly always on their minds, even when they're celebrating goals, and doing the "stanky leg." 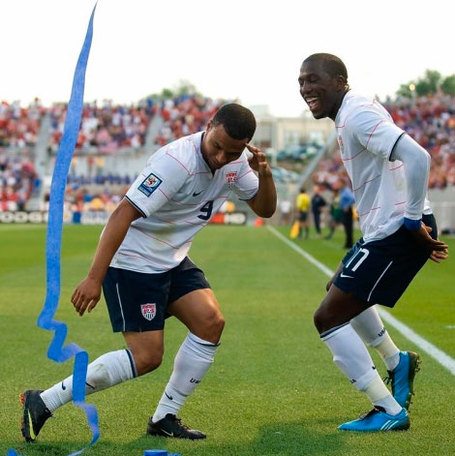