The Yankees Mascot That Thankfully Never Was

Share All sharing options for: The Yankees Mascot That Thankfully Never Was

The Wall Street Journal has a fascinating article about the tragic story of the Yankees mascot that could-have-been, Dandy.

You should give it a read, but to sum the story up: Yankees see Phanatic, Yankees copy Phanatic, Lou Piniella attacks Mariners' mascot, George Steinbrenner publicly calls out the very concept of mascots two weeks before Dandy's debut. 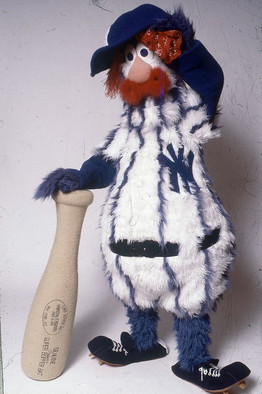 Perhaps this is a case where fate conspired to bring about the best end result for everyone. Certainly, Piniella's bizarre attack on a giant chicken stopped what could have been an embarrassing piece of Yankee lore from ever entering the history books. It's hard to talk about the Yankee Aura and Mystique (free with every $50 Yankee Stadium steak!) when you've got a guy running around in a giant costume swinging a cartoon bat around.

It was probably best for us Yankee haters, too. While Dandy may have been one more thing to taunt the Yankees about, at the same time it might have detracted from what we love to hate about them: that self-promoted concept that they are somehow different or better than everyone else in baseball.

Just consider the Johnny Damon deal. The Yankees signed away the fun loving team leader in Johnny Damon, and when he showed up in Pinstripes, it was without his characteristic caveman look that had earned him comparisons to Jesus in Boston. Johnny had sold his hair, and Johnny had sold his soul. But do you really think the Yankees could pull off their ridiculous Mad Men in Pinstripes policy if they had Dandy running around looking eerily like Red Sox era Damon? If he had shown up the same Damon as always, it would have been an entirely different, deeper kind of betrayal.

So perhaps it's a good thing that George almost accidentally killed Dandy before he was even born. I'm no great fan of Wally, but I can recognize his use in keeping the kids entertained at the show. It's the sort of thing a fun organization would have around, not an evil empire. And if it kept me from having to wonder if Dandy's body hair just happened to grow out in the exact pattern of a Yankees jersey until I was mature enough to handle the frightening question, then all the better.