Daniel Nava, And His Rather Amazing Trip To The Majors

Share All sharing options for: Daniel Nava, And His Rather Amazing Trip To The Majors

Admittedly, sometimes sports aren't very fun. At SB Nation, I've had to write about steroids in baseball, Chris Henry's death, labor negotiations, court proceedings and Brett Favre. And that's not to say that those stories were of equal importance, of course, just that they represent a part of sports that sometimes takes the joy out of it all.

But then other times, stories like Daniel Nava come along, and suddenly everything seems okay again.

If you didn't hear, Nava hit a grand slam in the Red Sox' win on Saturday -- on the first first MLB pitch he ever saw (becoming just the second player ever to accomplish that). And while that is amazing by itself, it is just latest chapter in Nava's story.

Most recently, Nava made news for being the minor league ball player who left a single ticket for ESPN's Erin Andrews at every game for the past three years (she has never accepted his invitation). 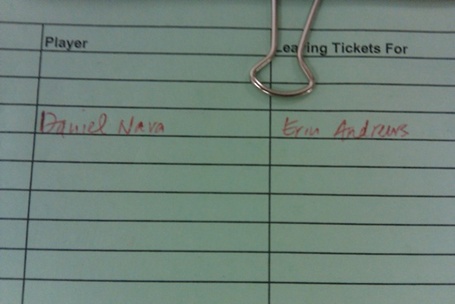 But before his schoolboy-like crush on ESPN's best-known sideline reporter, Nava was grinding on an up-and-down ride that reached its pinnacle on Saturday when the Red Sox called him from Pawtucket.

Like most, Nava played baseball in high school. Unlike most, Nava was a 4-foot-8, 70-pound freshman that rarely saw any playing time.

"I really was 70 pounds. I couldn’t go on the rides at the theme parks, I was so small," Nava said. "That kid could barely swing a 32-inch bat so I don’t think he was thinking about the big leagues or anything like that."

Not surprisingly, he drew zero interest from any colleges (although as a senior he earned an All-League honorable mention, at his new height of 5-foot-5), and when he tried to walk-on at Santa Clara, he was greeted with a common response: too small. So Nava instead took a position as a team manager, doing laundry and whatever else he could just to be involved.

Then, out of nowhere, Nava had a growth spurt, and transferred to College of San Mateo, a tiny junior college (Santa Clara simply got too expensive for his family). It was there that Nava excelled: All-Conference and Junior College All-American accolades in his two seasons. That success prompted another move, this time back to Santa Clara, on scholarship, where he continued to improve and actually led the West Coast Conference in batting average and OBP.

However, his late-blossoming was not enough to attract the attention of any clubs and Nava went un-drafted (and even unsigned). He settled on the Chico Outlaws of the Independent Golden Baseball League ... which promptly cut him ... before quickly calling him back when roster spots opened. Nava again took advantage of this second chance, and was named Best Independent League Prospect by Baseball America.

This (finally) caught the attention of some big league clubs, including the Red Sox, who signed Nava to a contract for $1 in 2007. Yes, one dollar.

The Sox did not have a scouting report on Nava from his college days at Santa Clara, when he led the Division 1 West Coast Conference in batting average and OBP. But they had seen his statistical profile, and became intrigued by a switch-hitter who was named the MVP of the Golden Baseball League while leading the Chico Outlaws to a championship in 2007 with a line of .371/.425/.625 with above-average defense. [...]

The Sox had never scouted him in person, but based on recommendations of Golden Baseball League officials, Nava appeared a good bet to be an undervalued player, and so the Sox acquired the rights to him, sight unseen, for $1, with the understanding that the team would pay an additional $1,499 if it kept him out of spring training.

Boston did eventually have scouts take a look at him, and decided to invite him to spring training in 2008, where he played well enough to earn a spot with High-A Lancaster of the California League (for a salary of $1,100 per month).

After all of that, Nava was called-up to Fenway on Saturday, and understandably, was a bit shocked.

Then, when he finally got the notice that he would be starting in left field Saturday afternoon for the Boston Red Sox, Nava didn't know immediately what to say or do. "It's obviously a dream come true. I was telling my friends, ‘Sorry guys if I don't know what to say because I'm kind of speechless.' The whole thing happened so fast. I'm trying to learn what to do, where to go."

From scrawny high school freshman to team manager to junior college to independent league casualty to Boston's minor leagues to hitting a grand slam on the first big league pitch he ever saw.

Oh, and while Nava certainly enjoyed his moment in the spotlight, he may have enjoyed a congratulations from a special fan even more:

@weeisports have Dave Obrien pass along my best to Daniel!! Congrats on a big day that will go down in Sox history! Hope to meet him soon!less than a minute ago via Twitterrific