First, if you haven't yet read "The Teammates: Portrait of a Friendship," by David Halberstam, get on that (and let this be a reminder that it makes a great gift with Father's Day just around the corner). It tells the story of Dom DiMaggio and Johnny Pesky driving to visit a dying Ted Williams, and details, along with Bobby Doerr, a close friendship that lasted well beyond their playing days.

And it is those four players that will forever be on display outside of Fenway. 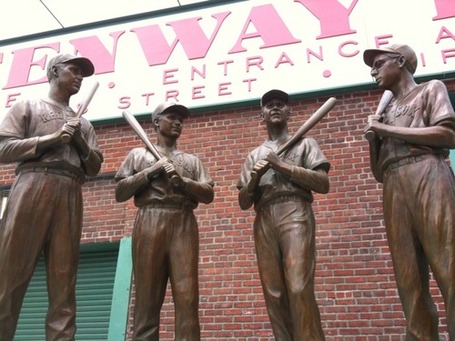 The statue depicts the way all four were in 1946, down to their cleats.

"We're here today to honor four great men, four teammates whose contributions to the Red Sox, and the legacy and lore of the Red Sox cannot be overstated," said Red Sox president and CEO Larry Lucchino this morning. "Their given names were Robert Pershing Doerr, Dominic Paul DiMaggio, John Michael Pesky, and Theodore Samuel Williams. You cannot think of one without thinking of the other almost automatically. To most of us their known simply as Ted and Dom and Johnny and Bobby..."

Added Peksy, “Ted, Dom, and Bobby have been my closest friends since my rookie year in 1942. I have had some great times with them and I am glad that thanks to the Red Sox our friendship will now be remembered forever in the form of this statue.”